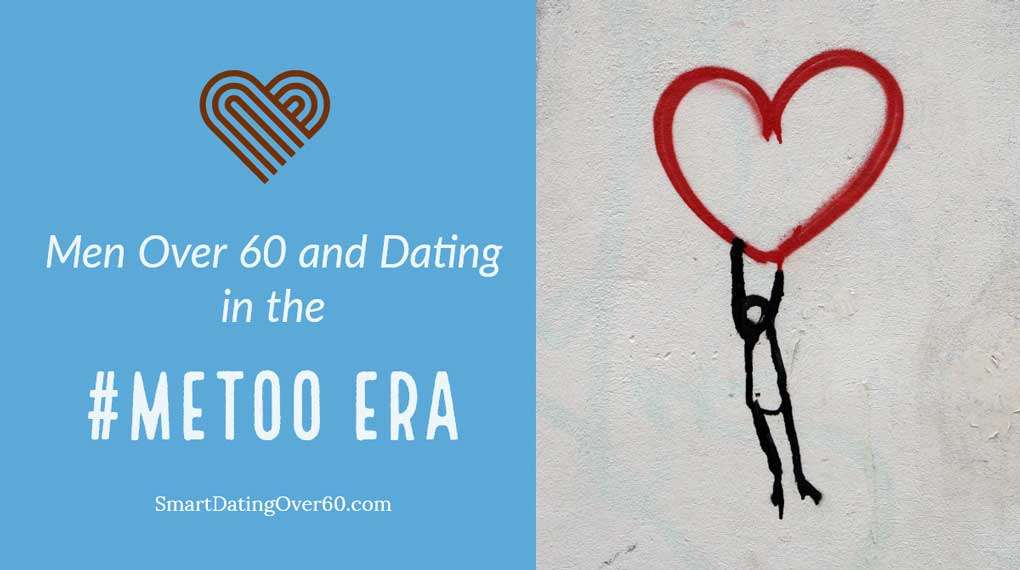 One of the most ridiculous things to come out of the #MeToo movement is some men’s fearful reaction to it. A quick search of “dating and #MeToo” turned up the following dating headlines:

Young single Americans are tired, confused and scared about dating during #MeToo

Men Think They Can’t Get a Date Because of Feminism

Of course, these headlines about dating during #MeToo use plenty of fear and sensationalism to sell more papers or get more traffic to a website. They intentionally evoke fear.

I say, don’t let them do that to you. It’s BS. It won’t help your dating life and it won’t make you a better person.

Instead, why don’t we shine a light on this misplaced #MeToo fear?

Mature Dating in the #MeToo Era

It doesn’t help that some famous men are talking about #MeToo in ridiculous ways. Actor Henry Cavill notoriously said in an interview last summer that it’s “very difficult” to pursue a woman that [old-fashioned] way “if there are certain rules in place. Because then it’s like, ‘Well, I don’t want to go up and talk to her, because I’m going to be called a rapist or something.’”

As James Fell wrote in response to Cavill’s comments, “#MeToo Only Makes Dating More Difficult if You’re a Rapist.”

As with most fear-based reporting, it’s based on a lot of False Evidence Appearing Real. So, let’s get real about what #MeToo means for your dating life.

GQ and Glamour magazines did a survey of men about #MeToo which found that “47% said they hadn’t discussed the #MeToo movement with anyone.” Ever. 35% changed their dating habits in response to #MeToo.

Why? Primarily out of fear. Seriously, how can you make an informed decision without ever talking to a woman about #MeToo?

It took me decades to learn how to respond to fear and disturbances. When I’m disturbed, it means two things:

When disturbed, I must first learn to accept that situation, person, or thing as being exactly the way it’s supposed to be at that time. Then, and just as importantly, I have to look at myself to see what my role is in the situation. In no case should I react impulsively, based on fear.

If it’s not already self-evident, what disturbs me about #MeToo is my own gender’s fearful reaction and the attempt to shift the focus away from the epidemic and systemic problem of sexual abuse and harassment.

The original idea of #MeToo is that sexual assault is widespread and prevalent. An entire spectrum of bad sexual behavior, ranging from flirting to assault, is built into too many institutions, and it’s old as the hills.

If you find yourself disturbed about #MeToo for other reasons, don’t forget to examine your role and your motivations.

Social media fads like #himtoo are based on flawed logic. This “movement” came to life this past summer during the Supreme Court hearings for Judge Kavanaugh. #HimToo thrived on fear.

In How the #HimToo Hashtag Restored My Faith in Humanity, Molly Jong-Fast writes,

#HimToo proponents say that a false accusation shouldn’t destroy someone. Agreed. But this second fact does not negate the first. The second fact also diverts focus away from the truth of the first.

Proponents stoked the growing atmosphere of fear by announcing that if this candidate were rejected, then all males would be subject to more false accusations, anytime, anywhere. So beware.

This is more flawed logic. The fact is that yes, anyone is open to the possibility of a false accusation. It’s also a fact that there is no correlation between the rejection of this candidate, and a change in the odds of any one of us being falsely accused of something. The primary thing to increase the odds of this happening is bad behavior. When inappropriate sexual behavior happens, there is indeed a correlation.

Don’t get suckered by flawed logic, sensationalism, and hidden agendas behind “arguments” like this.

Tips for Responding to #MeToo with Maturity

Maturity isn’t supposed to be the mere passage of time. It’s a change of personality such that we respond to life in an appropriate manner. If we work at it, we can get better at it as the years go by.

If you’re part of the mature dating scene, here are some simple, common-sense tips for staying in it—without fear.

1 – If you don’t want your mom or your sister to know about some of your dating behavior, you probably shouldn’t be doing it.

2 – The golden rule always works: treat others as you would like to be treated.

3 – Be compassionate and empathetic

The Golden Rule only works if you have compassion and empathy for your fellow human beings.

It’s only natural that women are guarded and perhaps a bit suspicious on those first few dates. They have to get to know you, like you, and trust you before a relationship starts.

Put yourself in their shoes and be sensitive to their needs.

It truly hurts me to see people being unkind to one another. We shouldn’t behave nicely because it’s suddenly a trend. Being nice is a given. When you look upon “Each human being is a multiplicity of miracles,” it’s easier to be kind to all. (Thich Nhat Hanh)

If you struggle to get dates, or to establish a relationship, it’s time to get to know yourself better.

If your dating experience is all about sexual conquest, you have an immature perception of sexuality.

If you’re making a pass to every woman you date with the expectation of having sex, you are part of the problem. In Dating After #MeToo, a woman wrote to say,

“I’ve been on a series of dates with men lately where they end the night by saying: “Just so you know, given the last year and #MeToo, I am not going to make a pass at you. You are going to have to make the first move.” I’ve been struggling to find a succinct and not-angry response. Mostly, I’ve felt grossed out that they missed the whole point of #MeToo. I say good night and never see them again.”

Men, if that’s you, it’s time to question your motivations. You’re still thinking of women as objects to satisfy your desires. It’s time to grow up.

#MeToo and the Community

“I’ve said repeatedly that the #metooMVMT is for all of us, including these brave young men who are now coming forward. It will continue to be jarring when we hear the names of some of our faves connected to sexual violence unless we shift from talking about individuals and begin to talk about power.”

If anyone feels unsafe, man or woman, we should talk about it as a community. Assault and abuse of power don’t discriminate.

Support women or men who are the victim of sexual assault and inappropriate behavior. Stop assigning a gender to the movement.

Thankfully that fear subsided. But for women, the potential for sexual harassment, abuse, and assault never goes away.

Every day they face a potential spectrum of abuse (from flirting to assault) wherever there is a man. As a man I don’t have to face that lifelong prospect of embedded fear. So men, let that really sink in before you start to squawk about #MeToo.

Sure, men can and do face similar kinds of abuse. But it’s not built into our culture the way it is for women. Remember that fact the next time you’re tempted to diminish the importance of #MeToo.

If you’re single and dating, don’t be guided by fear. #MeToo only makes dating difficult if there is something wrong with your beliefs and behavior.

If you find yourself disturbed by #MeToo, it’s time to turn inward for self-reflection. Learn how to date with true maturity. And don’t be afraid to talk to others, with acute awareness and respect, about the nature of the #MeToo movement.

We want to hear about your dating experiences … good, bad or mediocre

Spruce up your dating profile photo to attract more people